You are here: Home › News › Assessing feasibility of biogas generation in Gam
By on 09/07/2013 in Projects, Research 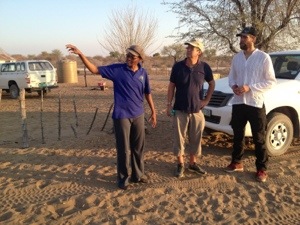 Only few communities in the remote rural parts of north-eastern Namibia have access to grid electricity. A majority of settlements there depend on wood for their cooking, heating and lighting.

Gam, a rural settlement situated in Otjizondjupa region close to the boarder of Botswana is an example of such an off-grid community. The settlement was formed as late as 1996 to provide a home for parts of the Herero population that, during Namibia’s liberation struggle, were living in neighboring Botswana. The current population is about 10 000, mainly Otji-Herero but also a rather large population of San. This, for Namibian conditions large population, has only access to the most basic infrastructure, a clinic, police station and a primary secondary school. There are several shops that caters for the most basic needs. None of these facilities have access to grid electricity. The School has one solar system that provides the computer lab and teachers room with power. Few stores and private homesteads use small solar home systems but a majority has no access to electricity. There is no petrol station in Gam and the nearest petrol station is situated in Tsumkwe, about 120 km north of the settlement. In response to the huge demand for fuel, petrol and diesel is sold from drums in a hardware store.

A lodge with 45 rooms in different levels of comfort has recently been built in Gam. The initiator of the project is a former Minister of Namibia’s government with his roots in the area. 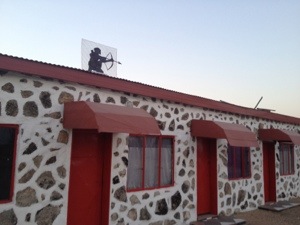 Section of the accommodation at Gam lodge
Early in September 2013 SusBiz together with Trinity Business Solutions (TBS) conducted a first field visit in Gam aimed to assess the feasibility of introducing small scale biogas production at the lodge and at other key institutions in the community. The feasibility study is funded by the Swedish Tillväxtverket. The expected output of this study is a report outlining possible options for production of biogas for cooking, heating and lighting. Initially the focus is on the lodge, but if successful the technology is intended to be rolled out to other institutions and individual households in Gam. This will be a welcome improvement as women and children currently have to walk as far as five kilometers to find suitable wood for cooking and heating.

Interviews with community members revealed that both staff at the lodge and representatives from individual households are willing to use cattle dung to produce gas for both cooking and lighting. Initial calculations suggest that a daily collection of about 8 kg of a mix of dry and wet dung would be sufficient to provide a family of ten with enough gas to cook two meals per day. These figures are approximate and have to be confirmed through piloting the technology in the field.

LPG gas is currently used at the lodge for cooking and heating of water. To replace this gas with biogas would reduce the cost of energy but also offers a range of challenges as the daily demand of gas varies from day to day, depending on the number of guests and other activities like community meetings and/or workshops. Sizing of the system will be difficult, as will the development and implementation of procedures for collection of animal dung from surrounding cattle posts and water points.

There are two septic tanks at the lodge that possibly could be used to produce biogas for heating and lighting. All community representatives interviewed said that they would be reluctant to use gas produced from human feaces for cooking, but for heating of water and lighting there seems to be no reservations.

Apart from the clinic and the police station, where the lack of electricity has serious Implications, the school is currently cooking maize porridge for 650 learners five days a week in five large iron pots, heated by wood that the learners bring to school in return for food. Replacing the wood with biogas and improving the cooking facilities would reduce the pressure on already limited wood resources and provide a better working environment for the staff that prepare the porridge. 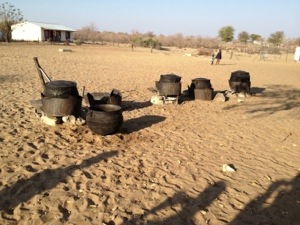 Pots used to cook porridge for about 650 learners per day
Parallel to this initiative the Namibian Government is planning to construct a solar diesel hybrid system in Gam to improve the access to electricity for both institutions and individual homesteads. The provision of electricity from partly renewable resources and the introduction of biogas for cooking and heating are believed to complement each other, hopefully resulting in improved livelihoods for all in this remote settlement.

The next step of the project is to report and present findings and possible options for biogas production at the lodge, school and individual homesteads in Gam. The findings of the feasibility (if it turns out that biogas is a viable option) will form the basis for development of a new project that will pilot and implement successful technical solutions. A central component of such a project is the involvement of community members throughout the process and capacity development of users of the technology. The benefits of establishing an energy information centre at the school will be further investigated.

This field report was compiled by Patrik Klintenberg

View all posts by →